Clint Rogers chose Manang for his Ph.D. dissertation field research because of the community's fascinating history of business activity in Southeast Asia and Kathmandu and the vibrant nature of recent entrepreneurial activity in Manang. While [...]

Stories and Customs of Manang

This book is a compilation of information collected by several people interested in the culture of Manang. The book introduces you to the rich cultural history, dynamic geography and melodic languages of the Manang Valley. The book evoke the d [...] 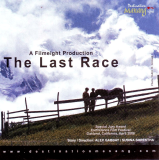 The last race is a docufiction movie. It depicts the story of two friends and it showcases one of the major festival "Yartung" (Horse Race). The film won Special Jury Award at Earth Dance Film Festival in Oakland, California on April, 2006. 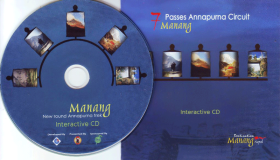 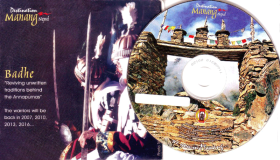 This is an interactive CD with information on Manang Valley and Manang Youth Society. 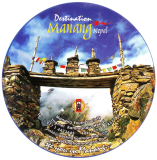 Sticker with the Nar Gate (the main entrance to Nar village, Manang)

Among the many colorful and symbolic festivals of Manang, Badhe stands off as a very intricate form of performing art of the Nyeshang community. Badhe is amidst one of Manang's lost cultural jewels. Old folks vividly remember how during the fa [...]

Manang district lies in the western part of Nepal, which covers an area of 2,246 sq. km. It is one of the remotest districts of the country, rich in culture and nature, making it a major trekking destination in the Himalaya. The region falls o [...]

Pisang Peak (6,091 m) offers good scope for exploration. The western flank of the mountain is guarded by a hanging glacier and offers considerable challenge. The western end of the ridge is guarded by hude rock slabs, which make it difficult t [...]

Over the Himalaya is a hidden valley. Surrounded by the 8,000 m-plus Annapurna range and the great peaks of Pisang and Chulu, the valley is wild and wonderful. Nomadic Tibeto-Burman people, moving across the mountains hunting and gathering foo [...]

There are several lakes in Manang, mostly the result of glacier erosion. Tilicho lake (4,915 m) in the south is located above sea level and is very isolated. During winter the lake is almost frozen, but in spring and summer as the snow begins [...]